Republicans have used the first night of their national convention to issue dark warnings about the future of America, arguing that re-electing Donald Trump is the only way to save the country from falling into socialism, economic ruin, violence, and anarchy.

Monday night’s theme was officially the “land of promise,” but the collection of speeches offered an almost apocalyptic vision of what’s at stake in November’s elections, and a dizzying array of misleading claims.

“They’ll disarm you, empty the prisons, lock you in your home and invite [street gang] MS-13 to live next door,” the congressman Matt Gaetz of Florida said of the Democrats in his speech, likening the prospect to a “horror movie”.

“The same socialist policies which destroyed places like Cuba and Venezuela must not take root in our cities and our schools,” Trump campaign senior adviser Kimberly Guilfoyle warned in a loud, inflammatory speech to an empty room.

Directly lifting a line from the Democratic presidential candidate Joe Biden’s stump speech, Guilfoyle, whose partner is the president’s son Donald Trump Jr, said: “This election is a battle for the soul of America. Your choice is clear.”

Guilfoyle described Democrats as focused on enslaving Americans to their liberal ideology “to the point that you won’t recognize the country yourself”.

While Biden has moved to the left during his presidential campaign, he is regarded as a moderate within the party and spent much of the Democratic convention last week touting his support among anti-Trump Republicans.

Other featured speakers described the incumbent president as a compassionate man who succeeded through his first term in office in the face of “radical” Democrats and the media, both presented as the president’s coordinated enemies hellbent on blocking his initiatives.

Mark and Patricia McCloskey, a white St Louis couple facing charges for brandishing guns at peaceful Black Lives Matter protesters, gave a pre-recorded speech, in which they baselessly accused Democrats of “protecting criminals from honest citizens” and trying to “abolish the suburbs”.

The dark tone was apparent to political operatives.

A video of Trump’s handling of the coronavirus pandemic featured multiple Democratic governors complimenting Trump and the federal government, editing out the fierce criticism of the administration’s response from those same speakers.

Trump has been criticized for playing down the pandemic, and saying the coronavirus – which has killed more than 175,000 people in the US, more than any other country by far – will eventually just “disappear”.

Voters have increasingly viewed the president’s handling of the coronavirus pandemic in a negative light. A new Gallup poll found that just 36% of Americans surveyed approve of how he’s handled the pandemic while 63% disapproved.

As the night wore on the more high profile speakers took aim at Biden and his running mate Kamala Harris.

“Joe Biden and the Democrats are still blaming America first. Donald Trump is putting America first. And he deserves four more years as our president,” the former UN ambassador Nikki Haley said, who is seen as a potential Republican presidential candidate for the 2024 election. “President Trump brought our economy back before, and he will bring it back again.”

One of the most common warnings throughout the night was about to cancel culture -the blanket censorship of public figures. Haley said Trump “knows that political correctness and ‘cancel culture’ are dangerous and just plain wrong”.

“Joe Biden and the radical left are also now coming for our freedom of speech and want to bully us into submission,” Trump Jr argued in his speech, again to an empty room. “If they get their way, it will no longer be the ‘silent majority’, it will be the ‘silenced majority’.”

The DNC included speeches from Republicans as a way to try and woo over moderates and Republicans who don’t support Trump. But most of the RNC addresses on Monday were aimed at revving up the Republican base. Trump himself has been more focused on that throughout his re-election campaign, hoping that an energized conservative electorate can overpower any broader coalition backing Biden.

The convention had some of the same elements as the Democratic national convention last week, including a short taped version of the roll call across America, testimonials from average Americans and the president interacting with people affected by the pandemic. But it also featured more live addresses over pre-recorded videos, which sometimes fell flat without the usual audience responses.

The format of the convention changed several times over recent months as the coronavirus crisis worsened. But despite health concerns, more than 300 cheering Republicans convened in Charlotte, North Carolina, on Monday to officially nominate Trump as the party’s presidential candidate.

In a preview of what was to come later in the evening, Trump claimed without evidence that the Democrats were attempting to “steal” the election.

“The only way they can take this election away from us is if this is a rigged election,” Trump told the 336 delegates in the hall, who had traveled to the convention from the 50 states and US territories. “They’re trying to steal the election.”

The majority of speakers at a political nominating convention such as the RNC or the Democratic national convention are usually current or former elected officials. But this year many of the speakers are celebrities for the conservative wing of the party.

Over the next four days the RNC is poised to be the latest example of the Republican party’s complete shift over to a political party centered on Trump. The revised party platform for the convention this year is just an expression of support for the president’s second-term agenda. And none of the featured speakers at the convention are Republicans who have strongly dissented with Trump – a few, like the former Arizona senator Jeff Flake, have instead endorsed Biden.

Both national and statewide polling has shown Trump trailing Biden and although polls have recently tightened, Biden came out of his party’s convention with a polling bump. Trump and his aides are hoping the convention will help shift both Trump’s approval numbers and the national spotlight in the president’s favor. 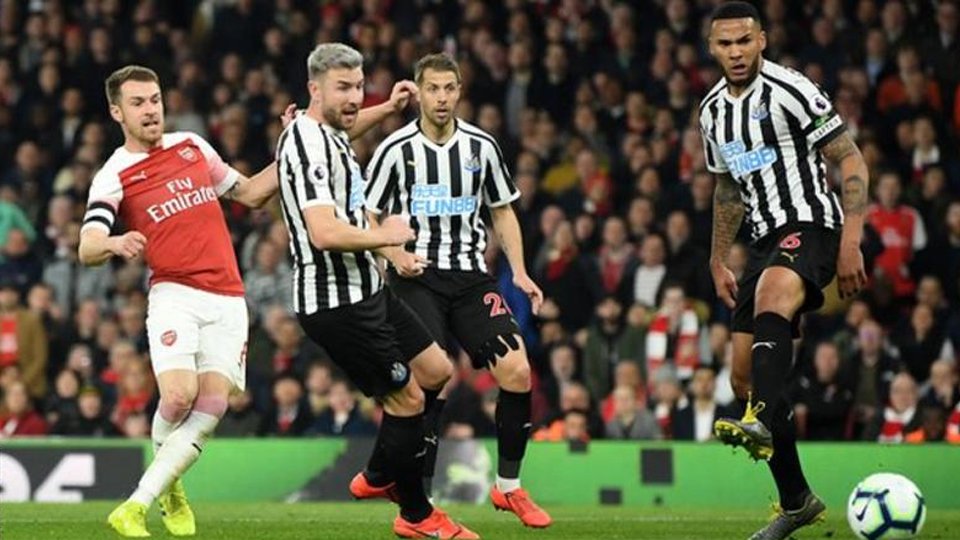 Arsenal climb to third with victory over Newcastle United